We’re pleased to announce that major work on our greenhouse structure is finished!  In the past two weeks, the finishing touches have been put on the building, including blowing in cellulose spray insulation and sealing up the cracks in holes and windows.  A huge thanks to all who helped us complete the job!  (Please contact us if you’re interested in hiring any of the amazing carpenters that made this happen!)

It’s been delightful to bask in the summer-like environment that is created in the greenhouse when the sun shines.  Even with temperatures near freezing outside, indoor temps have been up to 80 degrees on the ground level, and close to 100 on the second story.

It is fascinating for us to see how the structure performs, particularly in relation to changing indoor and outdoor temperatures.  Even though we’ve had outdoor temperatures recorded in the mid teens, the indoor temperature has not gone down much below 40 degrees.  This is largely due to the huge amounts of thermal mass storage we have inside the greenhouse, including a 900 gallon fish tank and two 1,300 gallon rain water tanks.  When the air temperature drops, the water in these containers releases its heat, preventing a freeze.  We’ve also been experimenting with biothermal heating, including having a compost pile and a team of metabolically active rabbits at work.

While temps have been favorable inside, we realize we’ve had a remarkably mild Fall/early Winter.  In anticipation of extreme cold arriving at some point, we’ve installed a thermostatically wired propane heater.  It will only be used to keep the greenhouse from freezing, should the thermal flywheel of our water mass drop too low.  Our goal is to be minimally, if at all, reliant upon fossil fuel combustion.  In the future, we’d love to do more to capture solar heat, and to explore efficient waste biomass burning options for backup heat. 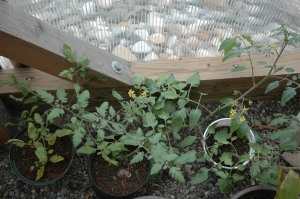 We are also experimenting with what veggies we can grow.  Before the frost this fall we took clippings from our outside tomato plants and rooted them in pots inside the greenhouse.  We dream of ripe tomatoes while the snow falls outside.   We also planted small amounts of beans and other vegetables to see how different plants perform.  Currently, we’re building large planting beds – stay tuned for a work party to get some dirt inside.  We also have planted peas for pea shoots, and are looking forward to soon testing microgreens.   Any donations of organic soil amendments, large pots, and leftover seeds would be greatly appreciated! 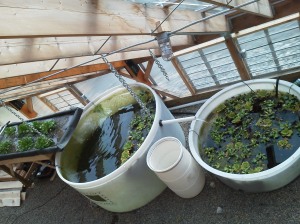 The recirculating aquaponics system is up and running!
Presently, it consists of a 900 gallon tank with an observation window that houses the fish.  From there, water flows into a smaller “touch tank” that is filled with floating water filtering plants, and critters like snails and crawfish.  Water is then pumped to an aquaponic filter bed, filled with a shallow layer of gravel and planted densely with water cress.  The watercress give the fish water a final polish, converting fish wastes into nutrients for itself.  After passing through this stream-like ecosystem, the water is returned to the fish, completing its journey full circle.  In early December, we travelled to Northeastern Aquatics in Rhinebeck, NY, where we purchased approximately 20 fish to live in our aquaponic system.  The fish family is made up of a variety of species, including carp, koi (which is basically an ornamental carp), catfish, brown and yellow bullheads, sunfish, and perch.  We chose these fish for being cold tolerant, and accepting of a mostly herbivorous diet.  The fish seem happy in their new home, and we look forward to see how the system as a whole evolves over the coming months.