We had a fantastic visit from the AP Environmental Science classes from Albany High in April.   After a tour of the greenhouse and grounds during which they held the animals and powered a lightbulb by riding a bike, we broke out into smaller groups for workshops on micro green planting, spring garden bed prepping, mushroom cultivation, seed balls, aquaponics, and composting. 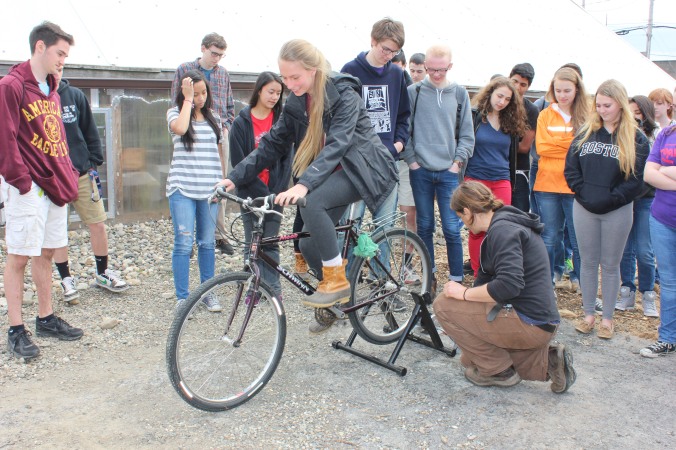 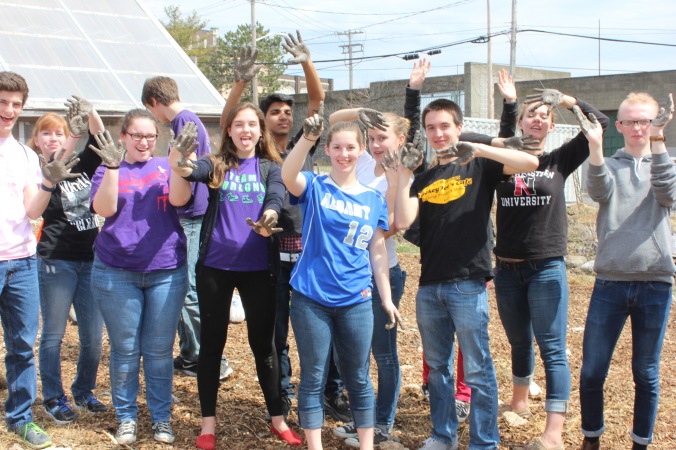 Here’s more detail and lots of photos from the visit:

On April 11th the Radix Ecological Sustainability Center was visited by a class of approximately 40 students enrolled in Larry Bizzaro’s AP Environmental Science class at Albany High School. The group was given a tour of the Radix Center, and then was broken into three groups to participate in two sets of 20 minute hands-on workshops. Feedback was highly positive, from both teachers and students with all eager to return to visit next year.

The day began with a tour of the center, which incorporated discussions about urban ecosystems (students were asked to define “ecosystem” and to challenge their assumptions about what constituted an ecosystem: what made one “healthy” or “high functioning” when another was not). They were asked how did the fact that humans are a keystone species in urban environments affect the perception of cities as being more or less of an ecosystem? What does that say about our attitudes regarding our own relationships with the environment?

From there we went on to discuss urban watersheds, CSOs, and rainwater collection. This is where I find an opportunity to discuss the complex relationships between self-interest and collective action. For example, when discussing rainwater collection, I discuss how rainwater is very useful to the individual for watering their own vegetables, animals, etc, and is on average much cleaner than surface or ground water found in the city. From there, however, we can look at it in a different context, and how by collecting rainwater and delaying its release into the environment, it has an opportunity to soak into the earth, and reduce the possibility of triggering a combined sewage overflow event. In this way, scales and consequences of individual actions are explained in a tangible, and relatable manner. Also, it’s explained how it’s possible to be engaged as a good environmental steward while simultaneously meeting your own self-interest.

We continued with our tour, showing off duck-a-ponics. This system effectively models the principles of a closed loop ecosystem, as well as the basic principles of biological wastewater treatment. From there we visited the beehives, where students had the opportunity to taste some honey, and discuss the concept of reconciliation ecology, or the idea that urban environments can support greater levels of biodiversity than surrounding areas. The also had the opportunity to interact with chickens and rabbits, which seemed to be the biggest crowd pleaser. It led to a conversation about the environmental and social history of keeping livestock in cities.

In the afternoon we split into groups to engage in hands-on activities. These consisted of an in-depth discussion of the aquaponics system, microgreens cultivation, seed ball making, mushroom growing, composting basics, and raised bed preparation.

The students have recently started a gardening club at their school, and were particularly interested in making raised garden beds as well as composting basics, which they hope to integrate into their school. In this way, the immediate relevance of a particular system is demonstrated. 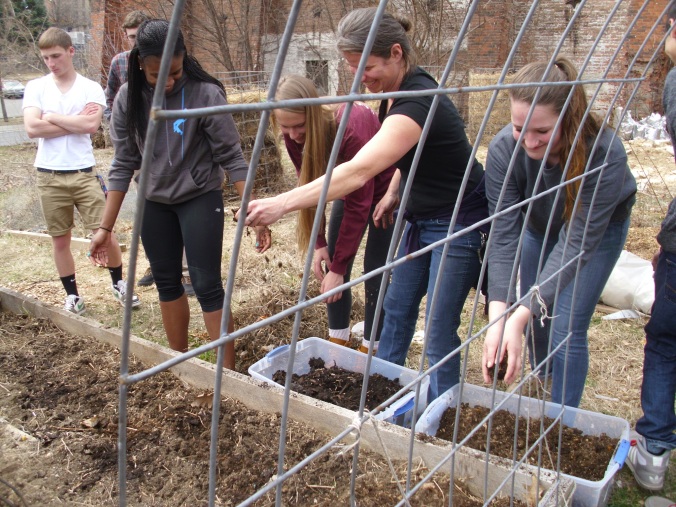 Seed balls are a great way to engage youth in plant growing education. Seed balls consist of a mixture of clay, compost, and seed. They are mixed together and rolled in to ½ inch balls and set out to dry. When dried, they can be thrown, or broadcast across an are needing to be planted with flowering plants. Doing so can be a fun way to create “urban meadows” in vacant lots in need of restoration. Balls can be thrown over obstacles such as walls and fences, which allows students to participate in a form of “guerilla” planting. In this way, students are encouraged to take an active role in the improvement of their communities, and are empowered to do so by breaching barriers such as fences that create significant physical barriers to accessing particular spaces.

Mushrooms provide an opportunity to discuss the foundation of ecologically regenerative micro-industries. We explain how urban waste products can be intercepted, turned into products for consumption or resale, and how the by-products can used for environmental regeneration (mycoremediation). 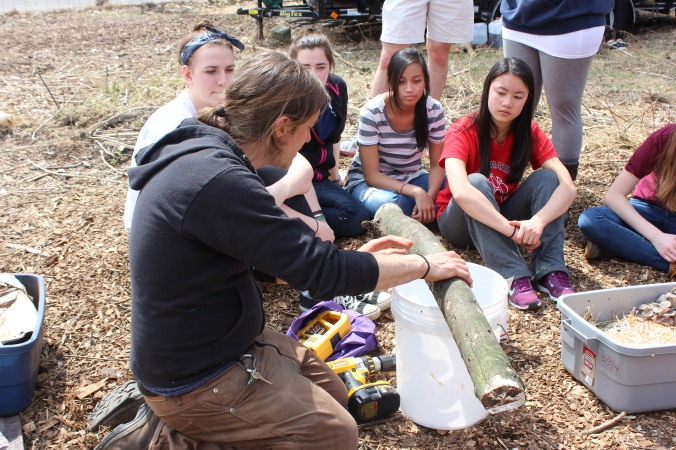 Wherever possible, we tried to engage as many of the students’ senses as we could, including the tactile and tasting senses. Learning is often based around just listening and watching,. By engaging students on a multi-sensory level, it’s possible to appeal to many different learning styles.

I also really try to emphasize letting students bring things back with them (mushroom bucket, microgreen trays, seed balls). This allows the learning to continue after they have gone back to the classroom, and reinforces it again when they have the chance to eat what they have grown. Microgreens are a great way to demonstrate to students that you do not necessarily need access to outdoor space to engage in food production – small vegetables can be grown in 1 foot by 2 foot trays that are kept in a sunlit window. 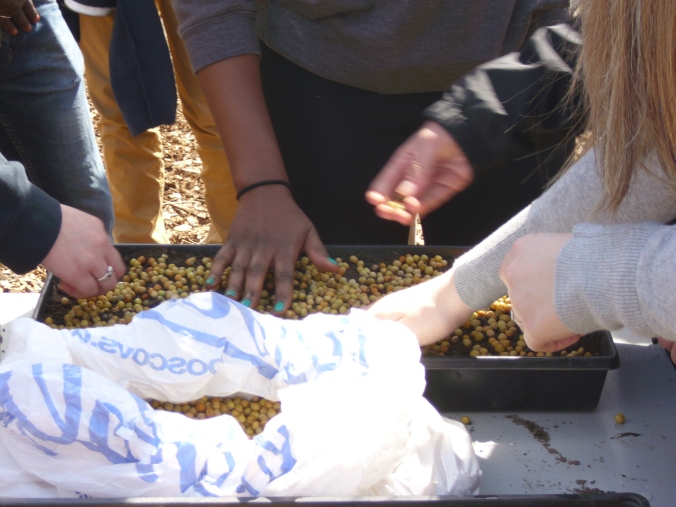